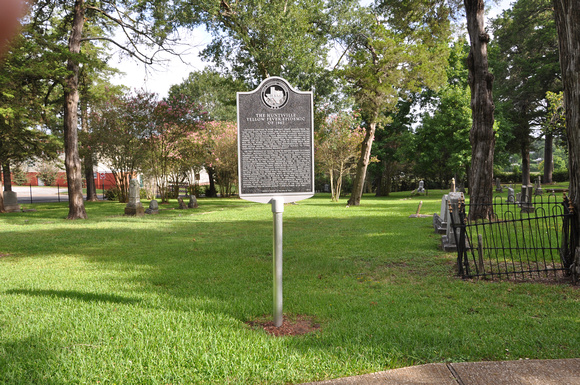 Text: Oakwood Cemetery is home to many grave markers from the year 1867 when yellow fever, one of the most dreaded diseases of the time, struck the county. The disease ravaged many cities across the United States. Texas remained relatively untouched until 1839 when Galveston experienced its first epidemic. As the primary port of entry for shipping from the Caribbean and the rest of the world, Galveston went on to suffer eight more epidemics through 1867. Due to the transportation of goods and people inland, the epidemics spread quickly to other counties in Texas, including Walker County. The first instance of yellow fever in Walker County occurred in 1853. Mosquitos from the Trinity River bottomlands northeast of Huntsville spread the disease rapidly through nearby Cincinnati. Town doctors did their best, but yellow fever was a relatively new disease in Texas and little was known about it. The second instance came in 1867 when a stagecoach passenger, who arrived sick from a coastal city, stayed at a Huntsville tavern. Soon after his death on august 9, the disease spread through Huntsville, claiming many lives. Many residents panicked and fled town, but many also stayed to tend to the sick. Those who had previously contracted the disease appeared to be immune. Many of the African Americans of Huntsville nursed the sick due to what was perceived as a low susceptibility to the disease. In September, the Howard Association of Galveston sent five experienced nurses and a doctor to aid the struggling doctors of Huntsville. Due to the epidemic, in all, approximately 10 percent of the 1500 residents of Huntsville died between August 9 and October 18 of 1867.
Andrew Butler Photos
Powered by ZENFOLIO User Agreement
Cancel
Continue