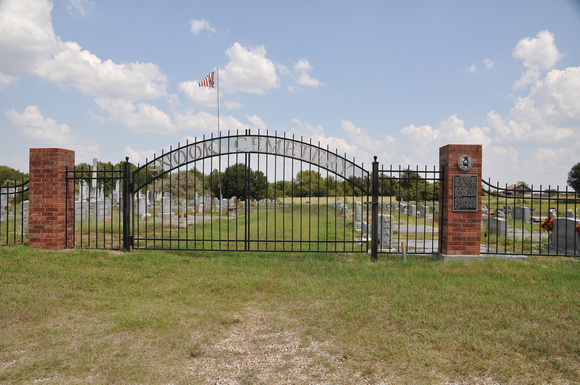 Historical Marker: Immigrants from Czechoslovakia settled in this area in the 1880s. The community was originally known as Sebesta or Sebesta's Corners, after one of the early families. In the 1890s, residents renamed the settlement Snook in honor of John Snook, the postmaster in Caldwell. By that time, the community cemetery was already in existence. The burial ground is sited on a swath of sandy ground, more suited to the early manual labor of gravedigging than the surrounding Blackland clay. The first burial was that of Vlasta Pitner, who died in 1885. Formally set aside through an 1899 land purchase, the property has been maintained and operated by a cemetery association since the early 1900s. Although the cemetery was originally established for people of Czech descent, as Germans and other immigrants began moving to the area it became available for use by those nationalities as well. Today, Snook Cemetery is the final resting place for veterans of American conflicts dating to the Civil War, as well as a link to generations of area settlers and the area's early Czech community.
Andrew Butler Photos
Powered by ZENFOLIO User Agreement
Cancel
Continue