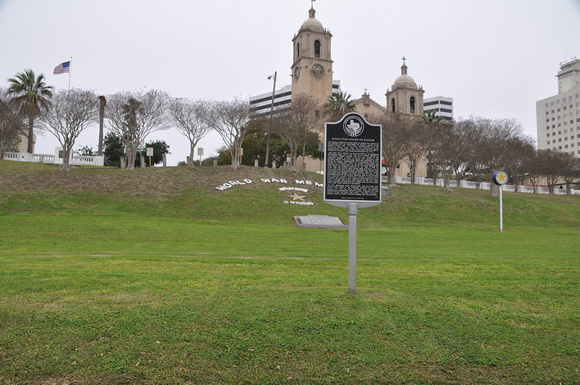 Corpus Christi
Nueces County, Texas
27 47.648' N 97 23.743' W
Directions: Start at the intersection of John Sartain Street and Mesquite Street. Go 1/2 block north on Mesquite Street. The marker is on the left (west) side of the street.

Text: The Corpus Christi Gold Star Court of Honor pays tribute to the mothers of the servicemen of Nueces County killed during World War I (1914-1918). Incorporated into the existing Spohn Park, part of the Broadway Bluff improvements completed in 1916, this court was the first of its kind in the state when dedicated on March 22, 1931. The court was a project of the Daughters of the American Revolution (DAR), led by Mrs. Sam (Lillie) Rankin, regent of the Corpus Christi Chapter. The DAR was joined by the American Legion, as well as local civic, religious and business groups. The Gold Star Court was designed by Mrs. Frank de Garmo. Instrumental in establishing Courts of Honor in northeast cities, de Garmo envisioned the memorial as a living space to honor the fallen servicemen who made the ultimate sacrifice in the "War to End All Wars". The city planted crepe myrtle trees and built a gold star light, three feet in diameter, outlined with yellow and white lamps; in the center read the words, "Our 1917 World War Gold Star Heroes." the gold star was located at the northern point of the highest terraces, and at the opposite end, Nueces County officials placed a magnificent flagpole. On August 2, 1932, a British 5-inch field piece and a 3-inch caisson and limber were added to the site. Later, large concrete letters reading "World War Memorial Gold Star Court" were placed in a semicircle. In 1988, Broadway Bluff, Spohn Park, and the Gold Star Court were listed in the National Register of Historic Places. The site fell into disrepair until volunteers undertook a restoration project in 2000. A private, city, and county effort, the Gold Star Court "the first in Texas" honors Nueces County's revered heroes and their mothers.
Andrew Butler Photos
Powered by ZENFOLIO User Agreement
Cancel
Continue