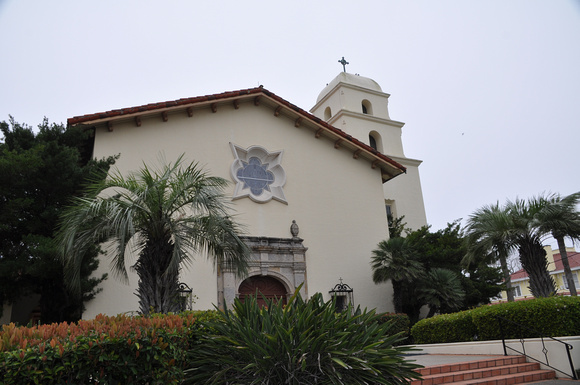 Church of the Good Shepherd Episcopal

Corpus Christi
Nueces County, Texas
27 47.174' N 97 23.778' W
Directions: Start at the intersection of Park Avenue and Upper Broadway. The church is on the southwest corner of the intersection.

Text: The earliest recorded visit of an Episcopal priest to Corpus Christi was that of the Rev. Lucius H. Jones in 1857. Three years later, a congregation was formally organized on the second floor of the Nueces County Courthouse. Bishop Alexander Gregg appointed the Rev. S.D. Davenport as the first minister. The women of the congregation soon organized a group known as the Dorcas Sewing Society, which over the years has provided much support to the church. The early years of the church were difficult ones. Corpus Christi's location on the edge of the frontier and the coming of the Civil War contributed to this difficulty. There are no recorded meetings of the church from 1862 until the end of the Civil War, and the congregation was without a minister for almost 11 years. During the late 1870s, the Church of the Good Shepherd constructed its first permanent building at the corner of Taylor and Chaparral streets. Additional facilities were built later, and in 1926 the congregation moved to its current location. Over the years, the church has emphasized programs of Christian education, ecumenical cooperation, and missionary activity in Corpus Christi.
Andrew Butler Photos
Powered by ZENFOLIO User Agreement
Cancel
Continue