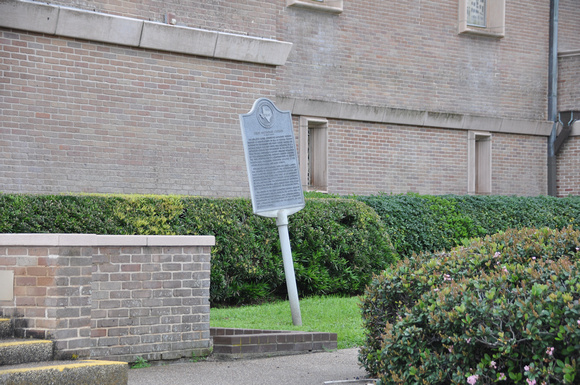 Corpus Christi
Nueces County, Texas
27 47.026' N 97 23.693' W
Directions: Start at the intersection of Furman Avenue and Shoreline Boulevard. The church is on the southwest corner of the intersection.

Text: The Rev. John Haynie conducted Methodist worship services at Corpus Christi in 1846 as federal troops gathered in preparation for what would become the Mexican war. It was not until 1853, however, that a Methodist church was established in the city. That year the Rev. Henderson S. Lafferty directed formation of this congregation. The church's earliest building, the first constructed by a denomination in Corpus Christi, was a shellcrete structure located at the corner of Chaparral and Mann Streets. Situated on land purchased from Col. Henry L. Kinney, the founder of Corpus Christi, the congregation's early facilities served as a community center and schoolhouse. They were also used as an emergency hospital during the city's yellow fever epidemics of 1854 and 1867. With the construction of additional buildings, the original block served until 1955, when new facilities were completed on Shoreline Drive. The history of the First Methodist Church reflects the fellowship's steady growth, its active role in the establishment of several area congregations, a commitment to the development of the community and a dramatic influence on the quality of life in Corpus Christi.
Andrew Butler Photos
Powered by ZENFOLIO User Agreement
Cancel
Continue