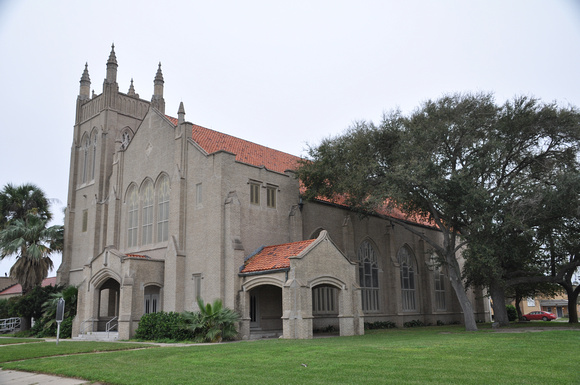 Corpus Christi
Nueces County, Texas
27 47.332' N 97 23.793' W
Directions: Start at the intersection of Agnes Street and Carancahua Street. The church is on the east side of the intersection.

Text: Formally organized on May 12, 1867, under the leadership of the Rev. William Mitchell, this congregation began with seven charter members. Construction of a sanctuary was begun immediately, but it was not completed until May 1868 due to a yellow fever epidemic in the city. By the turn of the century the congregation needed a larger building. With financial assistance from Henrietta King, a new brick sanctuary was built on Broadway in 1901-02. It served the congregation until 1930, when this sanctuary was completed. Built with a major donation from the Rachel Doddridge Estate, it is a fine example of the Gothic revival style of architecture. The brick-clad building features an offset tower, stone detailing, and art glass windows. As the congregation continued to grow, community outreach programs were organized. Church facilities were offered to house victims of hurricanes and devastating storms, and this church helped establish eight new Presbyterian congregations in the city. A part of Corpus Christi history for over a century, the First Presbyterian Church continues to serve the community with a variety of religious, educational, and outreach programs.
Andrew Butler Photos
Powered by ZENFOLIO User Agreement
Cancel
Continue