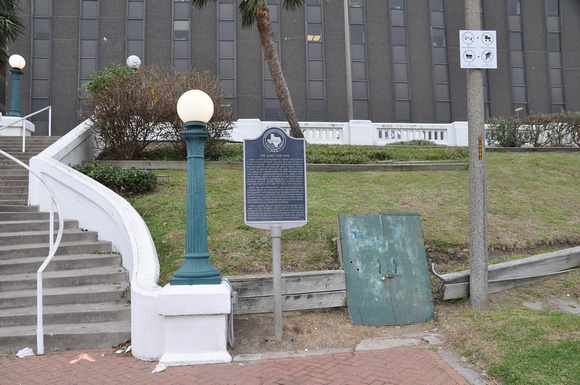 Corpus Christi
Nueces County, Texas
27 47.808' N 97 23.765' W
Directions: Start at the intersection of Antelope Street and Twigg Street. The marker is on the west side of the street.

Text: Henry L. Kinney (b. 1814), founder of Corpus Christi, began by October 1851 to organize the Lone Star Fair to boost local economy. The fair was publicized to attract new settlers to the area, but was a thinly-veiled attempt to recruit men for the army of Gen. Jose J.M. Carbajal, a Virginia-educated revolutionary who was trying to liberate northern Mexico. Kinney called on Dr. Ashbel Smith of Galveston, Governor P.H. Bell, and ex-governors J.P. Henderson and G.T. Wood to help promote the fair. Kinney advertised internationally and went deeply into debt to build the facilities. When the fair opened, May 1, 1852, main attractions included races on a new racetrack, bullfights by the noted Mexico City Matador, Don Camarena, the popular Maltby's Circus, a theatrical troupe from New Orleans, philosophical oratory, stock and agricultural shows, and exhibitions of horsemanship and wild bull riding, with prizes for all competitive events. Kinney planned for an attendance of 30,000, but only 2,000 visitors appeared. The failure of the fair was attributed to the remoteness of Corpus Christi, poor transportation, and the revolutionary activity the fair supported. The venture bankrupted Kinney and he soon departed for Nicaragua to recoup his fortunes.
Andrew Butler Photos
Powered by ZENFOLIO User Agreement
Cancel
Continue