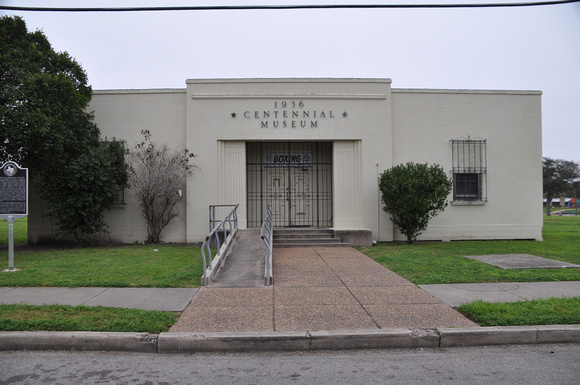 Corpus Christi
Nueces County, Texas
27 47.170' N 97 23.996' W Directions: Start at the intersection of 6th Street and Park Avenue. The museum is on the north side of the intersection.

Text: The Centennial Memorial Museum was built as part of a statewide commemoration of the 100th Anniversary of Texas Independence. In 1935, the Centennial Advisory Board of Nueces County discussed plans for the centennial. Original plans centered on hosting the annual splash days event and a historical pageant. However, the idea of a museum soon offered educational possibilities, promotion of regional history, increased tourism and a new community center. In 1938, the city of Corpus Christi donated a site within South Bluff Park and offered $1,200 toward the cost of the building. The commission of control allocated $4,000 and the citizens of the area donated over $1,000. Construction began in December 1938 and was completed on May 18, 1940. As a one-story 60 by 40 foot building, the museum was limited in space. Initially, Mary Louise Degarmo (d.1953), the historian on the committee, planned for a three-in-one museum highlighting history, art and science. Cattle brands, model airplanes, boat models, photography and geological exhibits promoted the uniqueness of the region. Art exhibits at the museum continued to grow as community participation in art also grew. After World War II, when the museum was used as a military support facility and the exhibits were removed, only the art component of the museum remained, as the history and science components were moved to a new location. In 1944, with the creation of the Corpus Christi Art Foundation, the museum changed its name to the Centennial Art Museum. The museum continued to be a vital cultural force in the community until space limitations forced the art museum's relocation to the art and science park on Shoreline Boulevard.
Andrew Butler Photos
Powered by ZENFOLIO User Agreement
Cancel
Continue