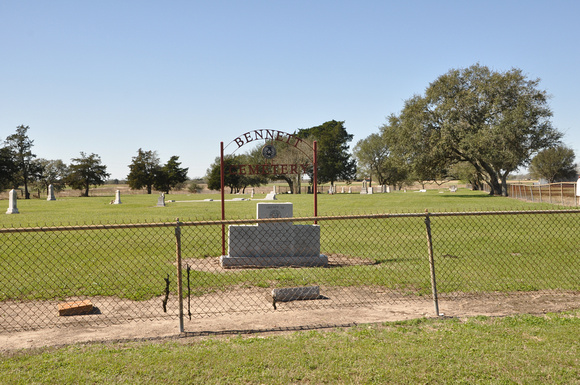 Sweet Home
Lavaca County, Texas
29 21.272' N 97 05.072' W
Directions: Start at the intersection of FM-531 and SH-77A. Go .4 miles south on FM-531. The cemetery is on the right (west) side of the road. Historical Marker: Stephen Bennett (1789-1874), a veteran of the War of 1812, and his wife Mary Ann "Polly" Breazeal Bennett (1798-1877), were born in South Carolina and lived many years in Alabama. They led a wagon train to Washington County in the Republic of Texas about 1841. They soon relocated to a part of Gonzales County which later became Lavaca County. Stephen Bennett became a successful farmer and prominent citizen. The first burial on this site is believed to have taken place in 1846 when Stephen and Polly Bennett buried their oldest daughter, Sarah Bennett (1819-1846). Other family members, friends and neighbors had been buried here by 1871 when the Bennetts deeded one acre of their homestead to their seven surviving children for use as a burial ground. The oldest marked burials are those of Lucy L. Dyer (1830-1873) and William M. McMurrey (1806-1873). The Bennett children left their mark on Lavaca County as prominent physicians, cattlemen, soldiers, county officials, Masons and teachers. After the youngest daughter, Mary A. Bennett McCutcheon, died in 1884, the family land was passed to her two sons, Willis McCutcheon, Jr., and B. B. McCutcheon. They later sold a portion of the family land, legally setting aside two and one-half acres for the cemetery. The last known Bennett relative to be buried here was William L. Tolleson (1851-1915). The last known interment on this site took place in 1977. The graveyard also has been known as Pioneer Cemetery, McCutcheon Cemetery, Sweet Home (City) Cemetery, and Bennett-Tolleson Pioneer Cemetery.
Andrew Butler Photos
Powered by ZENFOLIO User Agreement
Cancel
Continue