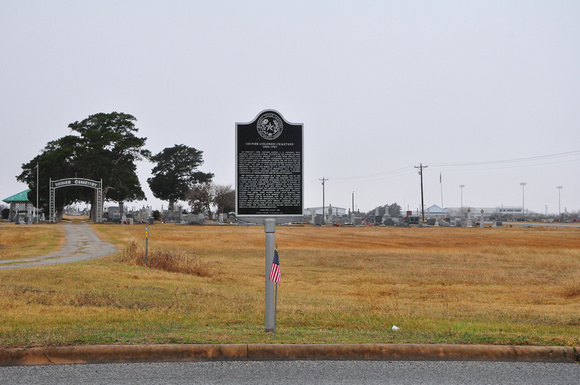 Historical Marker: In February 1898, Nathan Austin, J. H. Hannah, Paul Mitchell and William O'Neal, trustees of the Shiner Colored Cemetery Association, bought 1.2 acres from Adolph and Emilie Hohertz for $100. They established a burial ground for Shiner's African American citizens on the east side of the city cemetery, to the right of and nearly in front of the main gate. The June 2, 1910 edition of the Shiner Gazette reported the death and burial of J. H. Hannah in the Shiner Colored Cemetery, and also reported that a recent scholastic census showed African American children comprising 20 percent (52 of 259) of Shiner students. The cemetery was bordered by a wire fence, and by the 1940s all the plots had been used. The cemetery was often overgrown and in disrepair, and being at the lower end of a field, drainage was often a problem when it rained. In 1947, the ShinerCemetery Society agreed to move burials and gravestones to a new site about two miles south known as Blue Bonnet Hill Memory Garden. Historic grave materials, including gravestones of concrete, granite, marble and metal, were moved along with remains. The oldest marked grave at Blue Bonnet Hill is for Thomas Mitchell, who died in November 1899. The Shiner Colored Cemetery now has the appearance of an open field which blooms with wildflowers each spring. However, not all burials were moved, and several unmarked graves were left undisturbed. The cemetery remains sacred ground and a precious record of generations past.
Andrew Butler Photos
Powered by ZENFOLIO User Agreement
Cancel
Continue