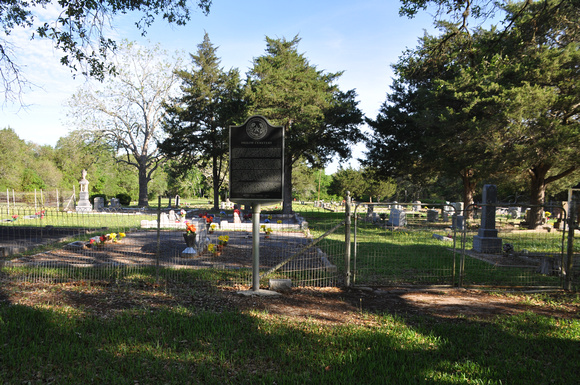 Historical Marker: Located between Schulenburg and Hallettsville, the first pioneer settlers in the Shiloh Community were of English and Scots Irish descent who immigrated to South Carolina and then Mississippi seeking warmer climates and economic opportunities. They settled here where timber and fertile land were abundant and named the area Shiloh after the settlement they left in Mississippi. The settlers eventually constructed a church and a school, and established a cemetery associated with the local Methodist Church in the 1880s. When many German immigrants arrived, they purchased the eastern portion of the cemetery for their use. Some unmarked graves were identified prior to the first marked burial in 1897, belonging to Frederick Schmidt Muller (1820-1897). As is custom, all graves face an eastern direction. Early settlers buried here include the five Lorfing brothers who emigrated from Austria as cobblers, blacksmiths, builders and farmers. One of the first teachers in the community, Hedwig Langenberg, is buried here as well as veterans. In 1968, the Shell Oil Company began drilling in the area and suggested a cemetery association to care for the burial ground. Prior to that time, family members or descendants cared for the cemetery. Most gravesites are individually plotted with cement curbing with granite, marble, sandstone or funeral home markers. Surrounded by a variety of trees and foliage many gravestones are in German, representing the cemetery and community’s heritage. With more than 170 burials, this historic cemetery is a reflection of the early pioneer settlers and development of the Shiloh community
Andrew Butler Photos
Powered by ZENFOLIO User Agreement
Cancel
Continue