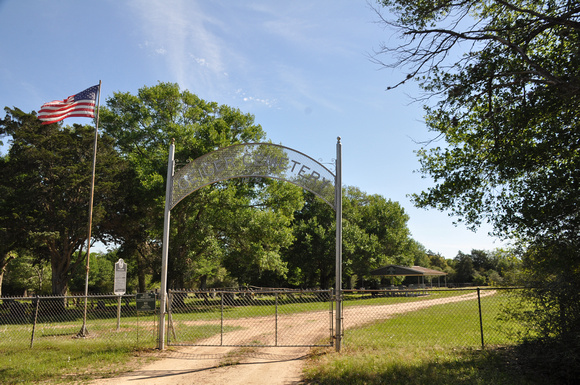 Historical Marker: Near this site was town once known as Strunkville. It consisted of a store, post office, saloon and a horse and mule gin owned by one of the first settlers of the town in 1854, Diedrich Strunk. On April 12, 1868, the Lutheran church was organized by Christoph Geiger, a German Lutheran minister sent to the United States from a missionary training school in Basel, Switzerland, to serve scattered communities and organize congregations where feasible. The community began burying their dead at Geiger Cemetery as early as 1868, though the date can be contented as some graves are unmarked or illegible. In 1879, Diedrich Strunk, Robert Miller, Sr. and C. Fernau, trustees of the Lutheran Church, purchased 24 acres of land from the Grayson brothers of Pennsylvania for the sum of $65.50, toe include the cemetery. The firsts church building of the congregation was called Bethlehem. In 1866, Pastor Geiger planned the erection of a larger church on the same site, and on May 26, 1887, Zion Evangelical Church was complete. The church was moved to the growing town of Sublime to better serve its congregation, many of whom were residents of the town. In 1905, the church was carefully taken down and moved by oxcart, where it was re-erected at its present location. The cemetery continued its use as the town’s graveyard and in the 1950s, women of the Lutheran and Baptist churches held ice cream socials and noodle soup suppers to raise funds for a chain link fence and an entrance gate for the cemetery. Families continue to come from miles around to maintain what is one of the oldest cemeteries in the area and one of the few remnants of a bygone town.
Andrew Butler Photos
Powered by ZENFOLIO User Agreement
Cancel
Continue