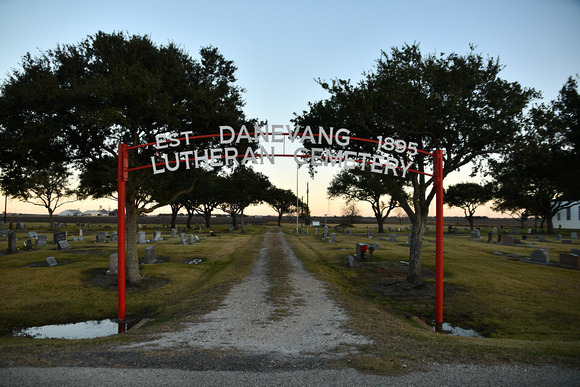 Danevang
Wharton County, Texas
29 02.596' N 96 12.217' W
Text: The Danish Folk Society obtained a land option from the Texas Land and Cattle Company and helped 93 Danish families from the midwest establish the Danevang Cooperative Settlement here in the early 1890s. The settlers, strong adherents of the Lutheran religion, organized an evangelical Lutheran congregation in 1895 with the help of the Rev. F. L. Grundtvig. Worship services were first held in the home of Mads and Maren Andersen. Early pastors came from Denmark and held services in the Danish language. The congregation erected a meeting hall at this site in 1895. A sanctuary made of native pine and cypress was erected here in 1909. A painting of St. Ansgar baptizing a child was placed inside the new church building and a 1700-pound bell, which could be heard four to five miles away, was placed in the church steeple. The sanctuary was destroyed in a 1945 storm and replaced with an army chapel which the congregation reassembled at this site. The first recorded interment was that of Maren Andersen in 1895. The cemetery, maintained by a board established in 1965, contains three former pastors and veterans of wars ranging from the Civil War to World War II among its more than 500 burials.