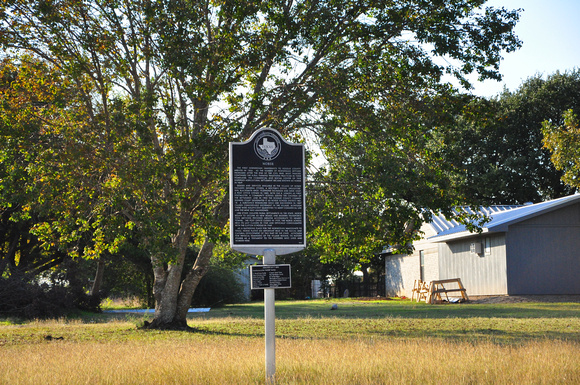 Text: The first Norwegian immigrants to Bosque County arrived in 1854. As the number of Norwegian settlers increased after the end of the Civil War, most families continued the rural farming techniques practiced in their homeland. The commercial and social center of this dispersed agricultural settlement became known as Norse in 1869. Goods and services available in the village of Norse included general stores, a doctor’s office, drugstore, gin, blacksmith shop, telephone exchange and shoe shop. A post office opened in 1880, with Ole K. Lomjen as first postmaster. A community school served the children of the settlement, and in 1902 the Bosque County Commissioners Court designated it as Norse School District No. 18. A substance resembling gold ore discovered in 1887 caused considerable excitement in the village, although there were insufficient quantities to merit commercial use and the mine was abandoned. Like other isolated rural settlements in the state, Norse began to decline as new roads and modern transportation methods provided greater accessibility to nearby towns. The post office closed in 1929; the Norse School held its last classes in 1940 and officially consolidated with the Clifton schools in 1949. As a gathering place for the Norwegian immigrants to Texas, Norse played an important role in the social and cultural development of this part of the state. Although, few physical reminders of the village remain, its history stands as a testament to the pioneers who lived and worked here.
Andrew Butler Photos
Powered by ZENFOLIO User Agreement
Cancel
Continue