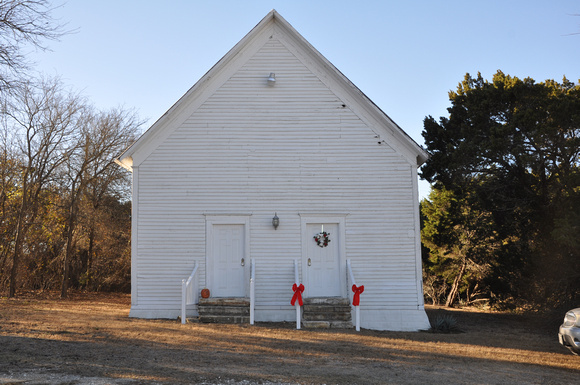 Text: This congregation grew from an early Coryell County fellowship known as the Church of Onion Creek. Worshippers met in a log building until it burned in 1854. In 1858 this site was acquired for a new church building. In the same year, the Rev. John McLain, a Baptist Missionary, organized the Eagle Springs Baptist Church from the earlier congregation. Charter members included J. H. and Nancy Estep; Evan A. and Tabitha Culpepper; Wyatt, Naomi and Serepha Hall; F. M. Elmira, and Mary Grimes; Daniel Jones; and C. S. and Zura Strickland. By 1880 Eagle Springs was a thriving community with two grocery stores, two doctors' offices, a post office, and a school. The congregation grew also, with many baptisms being held in the Leon River. During the first decades of the twentieth century, families began moving away form Eagle Springs. The community school was closed in 1935, and in 1948 members of Eagle Springs Baptist Church voted to disband. The church building was retained, however, for reunions and occasional services. It is one of the few remaining structures in the Eagle Springs Community.
Andrew Butler Photos
Powered by ZENFOLIO User Agreement
Cancel
Continue