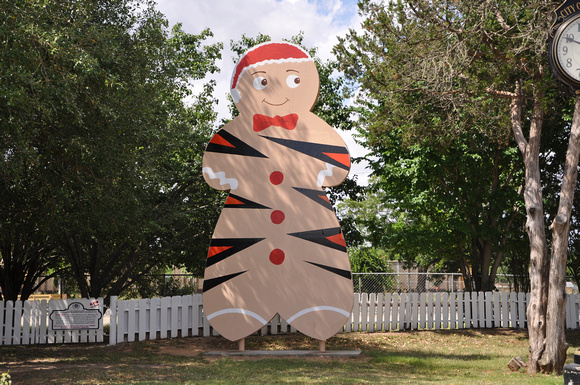 Here stands "Smitty", the 2006 Guinness Book of World Records "World's Biggest Gingerbread Man" winner. At their 2006 Festival of Lights, Smithville’s Chamber of Commerce baked this Gingerbread man after volunteers had worked for months trying out recipes, creating plans for a giant outdoor oven and baking sheet, and rounding up donations to fund the whole effort. It took a dump truck load of charcoal to bake Smitty, and a crane to lift him to a 65 degree angle, which Guinness had specified in order to qualify for the title. When baked, Smitty measured 20’ tall, 10’ wide, and weighed 1308.5 pounds. The feat was recognized by Guinness in 2008, and included in their 2009 edition.The Smithville Area Chamber of Commerce and the City of Smithville in 2008 decided to retire the cookie sheet used to create Smitty, and to convert it into a monument to commemorate the record. This monument was dedicated on December 6, 2008. The World Record was broken in 2009 by the IKEA Corporation in Norway, but Smithville is still fairly content that the largest gingerbread man in the USA still resides in Smithville. Information supplied by Carol Snyder and the Smithville Area Chamber of Commerce
Andrew Butler Photos
Powered by ZENFOLIO User Agreement
Cancel
Continue