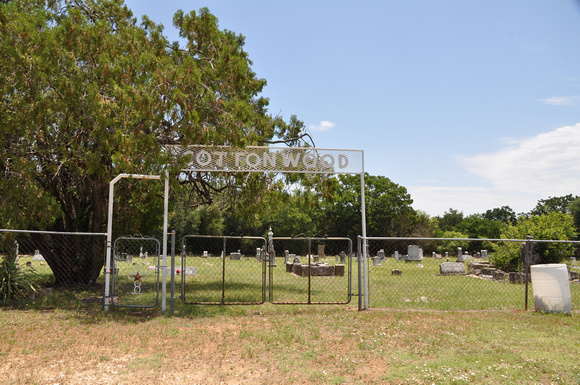 Text: For his military service with the Republic of Texas, George Washington Glasscock, Sr. (1810-68) received a land grant incorporating the future settlement of Cottonwood. His will conveyed this land to his daughter, Sarah Jane Glasscock Hall, whose husband, Phidello William Hall, was a Texas legislator (1870-74). In 1875, J. W. Love visited Cottonwood Springs near the headwaters of Green Briar Creek and homesteaded here. The land was well suited for farming, and the community of Cottonwood soon boasted several businesses, churches, a Christian academy, a post office, and two newspapers. In 1884, Sarah Jane and P. W. Hall donated land for the Cottonwood Cemetery, as well as land for Union Baptist and Methodist Churches. The burial ground was already in use, with the first known graves including infants dating from 1877. Cottonwood was noted for frontier violence; friends George Franks and Tom Jones who killed each other in Dec. 1882 are buried in a common grave. P. W. Hall died in 1888 and is buried here; Sarah Jane Hall is believed to be buried here too but her grave has not been identified. Prof. J. H. Yonley, founder of Cottonwood's Yonley Polytechnic Institute, is also interred here. The cemetery includes graves of veterans dating from the Texas war for independence. Droughts, lack of rail transportation, and a return to ranching led to a population decline in cottonwood. The cemetery contains several hundred graves and is a chronicle of generations of families who contributed to the progress of the community.
Andrew Butler Photos
Powered by ZENFOLIO User Agreement
Cancel
Continue