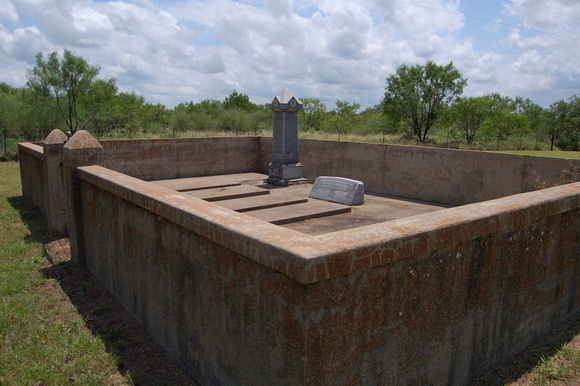 Historical Marker: Heinrich Conrad Kothmann (1798-1881) and his wife Ilse Katherine Pahlmann (1810-1905) and their family sailed from Germany to Indianola, Texas in 1845. Among the first families to settle in Fredericksburg, the Kothmanns were issued a 640-acre land grant in Mason County in 1848. In 1856 they moved to Art and were among the first immigrant families in this area. A trained cabinetmaker and musician, Kothmann began ranching and acquired another 640-acre tract of land. Located on their former homestead, the Kothmann Cemetery is all that remains of the original ranch site. Containing only five graves, all of Kothmann family members, the graveyard began with the burial of Heinrich Conrad Kothmann in 1881. His wife Ilse is buried beside him. Their son Karl, the first of their family born in Texas, is buried here along with his wife Katherine (Hoerster) Kothmann. A fifth unmarked grave is thought to be that of a grandchild. Though most of the land was sold after Ilse's death in 1905, the family retained one acre including the cemetery property. The concrete wall and slab were constructed after 1937 to provide protection and ease in maintenance for the five graves. The family maintains the cemetery.
Andrew Butler Photos
Powered by ZENFOLIO User Agreement
Cancel
Continue