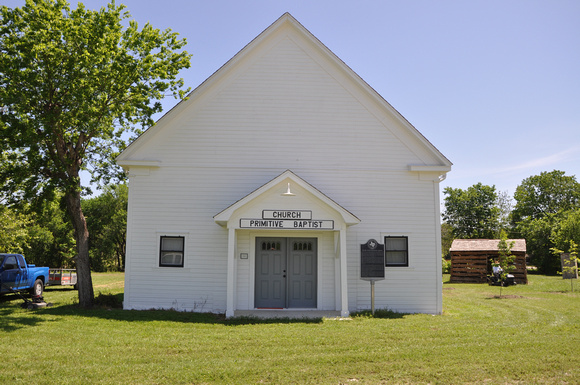 Text: Bethel Primitive Baptist Church originated in the Palo Alto Community, which was located about 3.5 miles northeast of present Killeen. Organized about 1864, the congregation met in a Union Church building shared with other denominations. When the Gulf, Colorado, and Santa Fe Railroad was built through Bell County in 1882, the town of Killeen grew up along the rail line. The Palo Alto post office was discontinued, and the community declined after most of the residents moved to Killeen. By 1889 Bethel Primitive Baptists Church had relocated to this site. Exhibiting design elements characteristic of the late 19th century, this structure is believed to be the oldest church building in Killeen. Its features include a steep gable roof, double-door entry with Gothic-inspired window details, and simple windows with protruding lintels. A part of Bell County history for well over a century, Bethel Primitive Baptist Church continues to serve a small congregation. It stands as a reminder of early settlement and rural vernacular architecture.
Andrew Butler Photos
Powered by ZENFOLIO User Agreement
Cancel
Continue