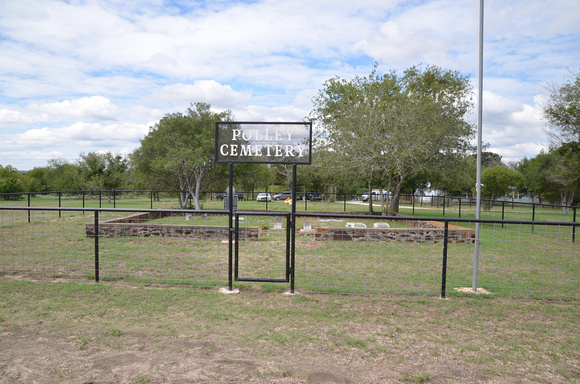 Historical Marker: Joseph Henry Polley (1795-1869) was born in Whitehall, New York to Jonathan and Rachel Hubbard Polley. He later moved to Missouri, where he was a friend of Moses Austin, with whom he traveled to Texas in 1820. The next year, he returned to Texas with Stephen F. Austin as one of the original “Old 300” colonists. Polley settled in the Brazoria District and wed Mary Augusta Bailey, daughter of pioneer Brit Bailey. The couple built a home that they named Whitehall. Polley served as sheriff and assisted retreating settlers during the Runaway Scrape, 1836; Mary helped mold candles for use by the first Texas Congress. Polley moved his family in 1847 to this area, then a part of Guadalupe County. The family established a cemetery as this site in 1848, when Emeline Elizabeth Polley James, one of the eleven Folley children, died while giving birth. Two years later, her daughter of the same name was interred next to her. The family completed the Whitehall home about 1850. Over the years, several family members, including Joseph Henry Polley, were laid to rest in the cemetery. Mary Bailey Polley (d. 1888), the family matriarch, was the last to be buried here.
Andrew Butler Photos
Powered by ZENFOLIO User Agreement
Cancel
Continue