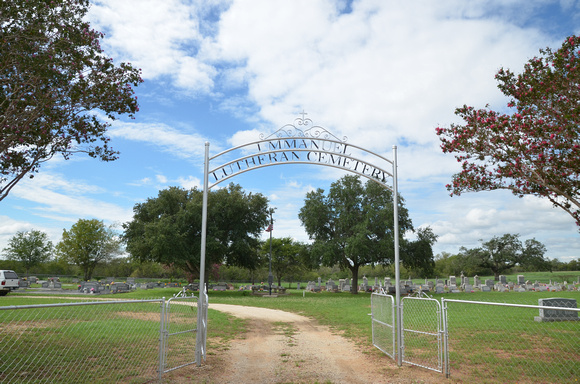 Historical Marker: This cemetery traces its beginnings to the formation of Immanuel Lutheran Church of La Vernia, which began in 1901. The congregation, mostly of German descent, soon found itself in need of a cemetery. In 1902, Gustav and Bertha Schroeder donated two acres of land to the church for that purpose. Members built a fence and held a formal dedication. The first burial was for Gabriele Hedwig Koepp, infant daughter of Franz and Augusta Koepp, in October 1902. Also buried here are early community and church leaders, and a number of military veterans from conflicts dating to World War I. The Immanuel Lutheran Cemetery Association began in 1980 and has remained active in maintaining and caring for the burial ground. The cemetery features German inscriptions, vertical stones and curbed plots. Enlarged with donations of additional land beginning in the 1960s, Immanuel Lutheran Cemetery remains an important link both to the history and the culture of this area.
Andrew Butler Photos
Powered by ZENFOLIO User Agreement
Cancel
Continue