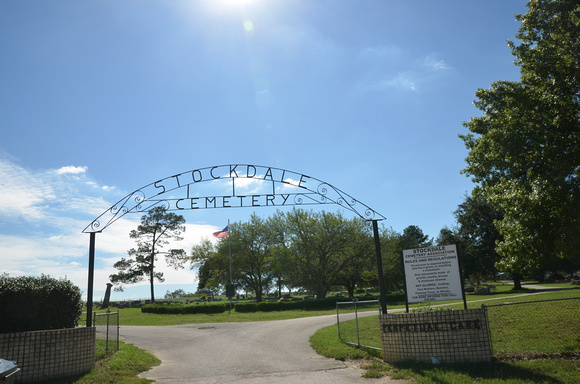 Historical Marker: Before the Stockdale Cemetery was begun in the 1870s, most burials in the area took place in private, family graveyards. About 1873, however, a young man who was not related to any of the local settlers was thrown from his horse and killed. To provide a place for his burial, Dr. T. M. Batte gave one acre of land at this site, and the burial ground has been used by Stockdale citizens since that time. Additional acreage was purchased in 1881 and 1904, and in 1938 area resident Paul Ballard donated an acre of land for use by anyone who did not have a family plot and needed a place for burial. The earliest marked grave in the Stockdale Cemetery, that of Sallie A. Pope, is dated 1873. Many early settlers are buried here, including the town's founder, John R. King, and the first schoolteacher, Martin West. The cemetery also contains the graves of numerous war veterans and victims of a post-World War I flu epidemic. The women of Stockdale formed an organization in the early 1900s to care for the gravesites, and in 1965 the Stockdale Cemetery Association was formally organized. In use for more than 100 years, the Stockdale Cemetery continues to serve the residents of the Stockdale area.
Andrew Butler Photos
Powered by ZENFOLIO User Agreement
Cancel
Continue