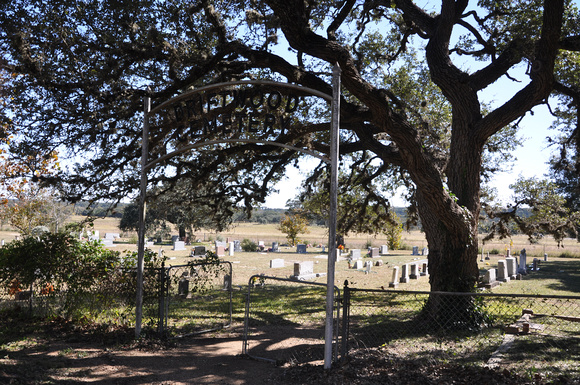 Historical Marker: This cemetery traces its origin to the building of a sanctuary by the Driftwood Methodist Episcopal church, South, here in 1884. The sanctuary was built on two acres of land acquired by the congregation from David L. and Mattie Elizabeth Dorrah. This cemetery was established on a portion of the churchyard immediately south of the sanctuary later that year. It replaced another cemetery established in the 1870s about one mile north of this site known as the Old Community Cemetery. Several of the burials in the old graveyard, including those of many early settlers of this are, were removed and reinterred in the newly established Driftwood Cemetery. Among the persons buried here are the following trustees of the Driftwood Methodist Church who helped establish the cemetery: James Thomas Eckols, Sr. (1841-1911); Thomas Martin (1821-1901; and the Rev. John Alexander Garrison (1849-1933), a prominent Methodist circuit preacher. The cemetery, which reflects the heritage of this area, contains the grave sites of community and church leaders and at least eight veterans of the American Civil War. The cemetery continues in use and is cared for by the Driftwood Cemetery Association.
Andrew Butler Photos
Powered by ZENFOLIO User Agreement
Cancel
Continue