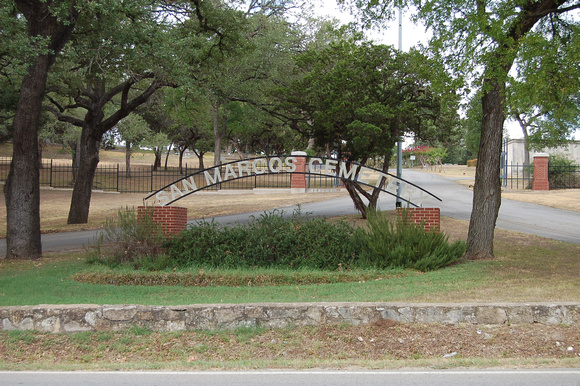 Historical Marker: This cemetery lies within the Mexican land grant acquired by Thomas J. Chambers in 1834. Chambers died in 1865 and in 1867 his widow, Abbey, sold 3,000 acres containing this site to H. N. Duble at an estate sale held in Galveston. A portion of the cemetery site was purchased by Freedman Peter Roberts in Galveston in 1868. Local tradition suggests that slaves of the area's earliest settlers were buried here prior to the first recorded burial, that of Major C. Rogers in 1876. The San Marcos Cemetery Association was organized in 1876 by Edward Burleson Jr., L. w. Mitchell, W. J. Joyce, E. P. Raynolds, Wallace Carnahan and W. O. Hutchison. That year the association bought 10 acres here from Judy Covington Dixon and her husband, Shadrach Dixon. By 1924 the cemetery acreage had increased to more than 20 acres due to land acquisitions from: H. S. and Laura Jane Harvey in 1890; W. O. Hutchison in 1892; Dock and Sarah Roberts in 1902; Beverly Hutchison in 1904; and Dock Roberts and John McGehee in 1908. San Marcos acquired the cemetery in 1924 and in 1964 a perpetual care trust fund was created by private citizens. Interred here are many pioneer settlers, War of 1812 veteran Louis Lawshe, and veterans of other conflicts ranging from the Texas Revolution (1835-36) to Vietnam.
Andrew Butler Photos
Powered by ZENFOLIO User Agreement
Cancel
Continue