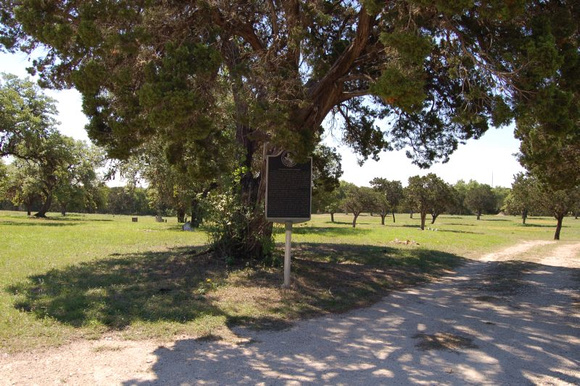 Historical Marker: In 1893 five trustees of the newly formed San Marcos and Blanco Cemetery Association purchased 10.62 acres of land from W. O. and Leonora Hutchison. The trustees were Henry Richardson, Luckey McQueen, Wyatt Newman, James Langdon and Miles Bowes. The land purchased was intended for use as a cemetery by the African American citizens of the communities of Nance's Mill and Mountain City, together known as the Blanco community. The graveyard site was located midway between the two communities. The earliest recorded burial was that of Emma Hamilton in August 1886, indicating the land was in use as a graveyard prior to the land purchase. The site was called the San Marcos Colored Cemetery. More than 300 graves are marked with headstones and exist along with numerous unmarked graves. among those buried here are teachers, farmers and ministers. The site has also been used as a paupers' burial ground and was sometimes referred to as the paupers' plot. In 1981 the name was officially changed to the San Marcos Community Cemetery and in 1996 the original name was restored to the San Marcos-Blanco Cemetery. The site is still active and is maintained by the cemetery association.
Andrew Butler Photos
Powered by ZENFOLIO User Agreement
Cancel
Continue