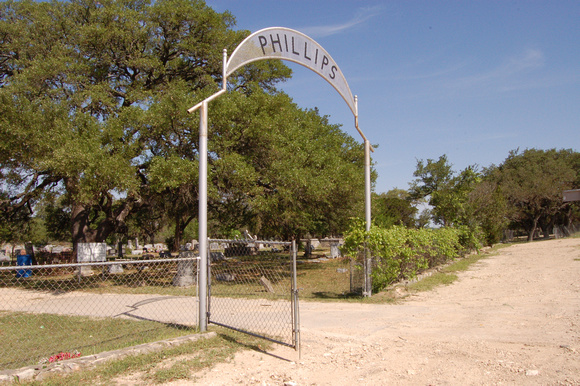 Historical Marker: Early settlers John and Nancy Phillips deeded land at this site to the Methodist Episcopal Church, So, in 1880. A small church was built and was dedicated on March 13, 1880. As was customary, members of the community were buried near the church. The earliest documented burial is that of B. G. Sorrell, who died on March 13, 1880. Among the graves here are those of numerous early settlers to the Dripping Springs area and sixteen Civil War veterans. In 1901 land for a new church building was acquired on the Old San Marcos Road (now Ranch Road 12). The original Methodist church building was sold and moved, leaving the site to be used solely for the Methodist cemetery. Families cared for individual graves, while members of the community maintained the cemetery. In the early 1920s the local blacksmith, William S. Garnett, ordered caskets and assisted with funeral arrangements. The Methodist church donated the cemetery property to the community in 1940, and in 1962 a cemetery association was formed to maintain the historic graveyard. Phillips Cemetery, as it was known locally, became the official name of the burial ground.
Andrew Butler Photos
Powered by ZENFOLIO User Agreement
Cancel
Continue