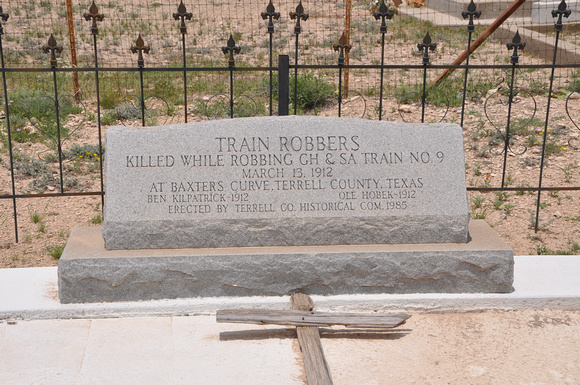 Ben Kilpatrick, a native Texan, was one of the last of the Wild Bunch that included Butch Cassidy and the Sundance Kid. On March 13, 1912, he and Ole Hobek were robbing the Galveston, Harrisburg and San Antonio Train near Dryden. While searching the baggage car, his attention was diverted and David A. Trousdale, a railroad employee, struck him in the head with an ice mallet. Ole Hobek was shot while attempting to flee - a less than glorious end to the Wild Bunch. They are buried in the Cedar Grove Cemetery in Sanderson. (See the Baxter Curve Historical Marker in Sanderson County)
Andrew Butler Photos
Powered by ZENFOLIO User Agreement
Cancel
Continue