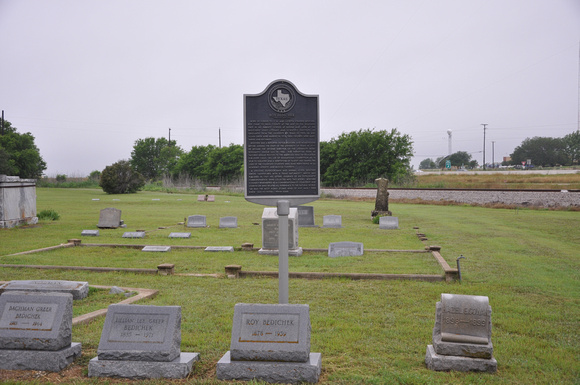 Historical Marker: (June 27, 1878 - May 21, 1959) Born in Illinois to J. M. and Lucretia (Craven) Bedichek, Roy came to Falls County at the age of six. Educated first in his parents' school at Blevins and later at the Bedichek's Eddy Literary and Scientific Institute, he graduated from the University of Texas in 1903. He and Lillian Greer were married in 1910; their children were Mary, Sarah, and Bachman. Bedichek was a reporter, editor, teacher, and homesteader before joining the staff of the University of Texas in 1917; he became the second director of the University Interscholastic League (UIL) in 1922. For twenty-six years he tailored league policies to the American ideal of education for every child. His use of educational competition as "a spur to industry and a whetstone of talent" has shaped the lives of the countless students who have participated in UIL academic, athletic, and musical contests. A lifelong outdoorsman and animal lover, Bedichek wrote "Adventures with a Texas Naturalist," which was published in 1947; his letters, evidence of his enthusiastic correspondence, were collected into two books. Bedichek is fondly remembered as a conversationalist, folklorist, and storyteller who related all experience to the natural world. "He had the most richly stored mind of any man I ever knew," said his friend J. Frank Dobie.
Andrew Butler Photos
Powered by ZENFOLIO User Agreement
Cancel
Continue