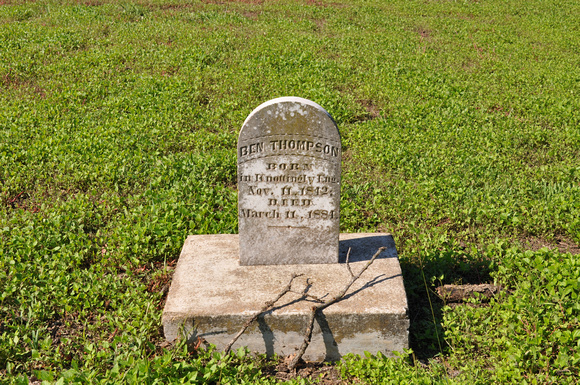 Ben Thompson (November 2, 1843 - March 11, 1884) was a gunman, gambler, and sometime lawman of the Old West. He was a contemporary of Wyatt Earp, Buffalo Bill Cody, Doc Holliday, John Wesley Hardin and James Butler "Wild Bill" Hickock, some of whom considered him a trusted friend, others an enemy. Ben Thompson had a colorful career, fighting with the Confederates during the American Civil War, and in Mexico under the Emperor, before being imprisoned at the age of 25 for the severely injuring his brother-in-law, who had physically abused Thompson's wife. After his release, Thompson made his name as a gunman and a gambler in Texas and Kansas. After he was hired in 1881 as Marshal in Austin, Texas, the crime rate dropped sharply during his term. He was murdered at the age of 41 in San Antonio on March 11, 1884 during the Vaudeville Theater Ambush. Source - Wikipedia
Andrew Butler Photos
Powered by ZENFOLIO User Agreement
Cancel
Continue