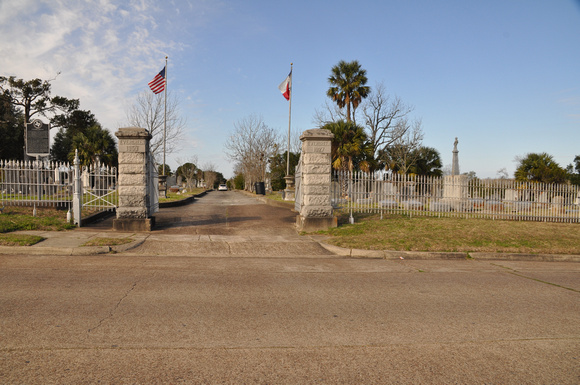 Victoria
Victoria County, Texas
28 48.683' N 97 00.506' W
Directions: Start at the intersection of Red River Street and Vine Street. The cemetery is on the southwest corner of the intersection.

Historical Marker: The first community cemetery in Victoria, located at present day Memorial Square, was unpopular with local citizens. They preferred home burial despite an 1846 city ordinance prohibiting the practice. In 1849 John McCrabb bought 27 acres of a tract granted to the city by the Republic of Texas. The property already contained the gravesite of Dr. Walter Fosgate, who died in 1848. During the 1850s, part of McCrabb's land became the new public cemetery. Following the Civil War (1861-65), many graves were moved here from the original city cemetery. Other reinternments occurred when old St. Mary's Catholic Church was razed in 1868. Because of city neglect, local women organized the Victoria Ladies' Cemetery Association in 1876 and took over care of the plot. The name "Evergreen Cemetery" was chosen in 1883 because of abundant trees in the area. The Evergreen Cemetery Endowment Association was established in 1912 to manage investment of maintenance funds. Over the years, further land acquisition has enlarged the site to 30 acres. Among the 9,000 graves here are those of Martin de Leon (1765-1833), early empresario and founder of Victoria; and veterans of the Texas Revolution, Mexican War, and Civil War.
Andrew Butler Photos
Powered by ZENFOLIO User Agreement
Cancel
Continue