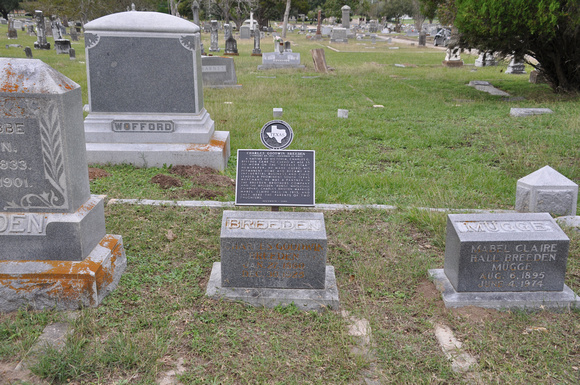 Cuero
DeWitt County, Texas
29 05.658' N 97 16.867' W
Directions: Start at the intersection of Sarah Street and Valley Street. The cemetery is on the northeast corner of the intersection. The marker is in the cemetery.

Text: A native of Victoria, Charles G. Breeden came to Cuero at age 15 to work on the "Weekly Star" newspaper. He made Cuero his permanent home and became an influential business and civic leader. A prominent south Texas merchant, he was a partner in the Breeden Brothers Company and the Breeden-Runge Wholesale Company. Charles Breeden married Mabel Claire Hall in 1915, and they were the parents of two daughters.
Andrew Butler Photos
Powered by ZENFOLIO User Agreement
Cancel
Continue