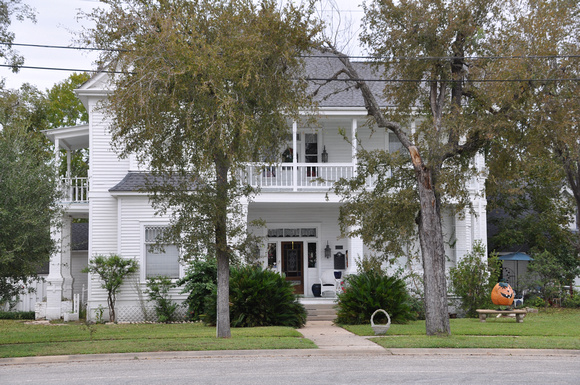 Cuero
DeWitt County, Texas
29 05.651' N 97 17.491' W
Directions: Start at the intersection of Terrell Street and Breeden Street. The house is on the northeast corner of the intersection.

Text: This structure was begun in 1883 as a one-story dwelling for Walter Kibbe Breeden (1858-1931) and his wife Margaret (Pleasants) (1863-1936). In 1889 Breeden and his brother Charles founded Breeden brothers, well-known mercantile company and cotton factors. In 1907 a second floor was added to this residence. Breeden's only son Paul Hamilton (1886-1967), who was born in this house, was a partner in his father's business, as well as a banker and civic leader. He married Henrietta Bess Philpott (1889-1976). Their family became the third generation to occupy the home.
Andrew Butler Photos
Powered by ZENFOLIO User Agreement
Cancel
Continue