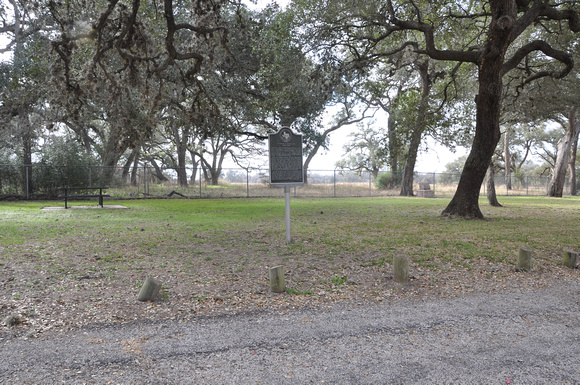 Text: (1863-1940) Community leader and businessman Charles A. Schlinke played a vital role in the development of Dewitt County. Born in Posen, Germany, Schlinke immigrated to the United States with family in 1869, following his father, who settled in Weesatche (Goliad Co.). in 1885, Charles Schlinke purchased property from his father and married Martha Kleiman, who was also born in Germany before immigrating to Texas. The couple had eleven children. soon after marrying, Schlinke purchased 3,948 acres in Dewitt County, and in 1893 he became a United States citizen. he raised horses, mules and donkeys for sale as working livestock and for riding. a believer in the value of education, Schlinke donated two acres of land to county school trustees for school use after the previous building burned down. Residents built valley view school on the donated property. Schlinke was also a founding member of the Lindenau Scheutzen Verein (Lindenau Shooting Club), established in 1901. The organization, which still exists, sponsored shooting competitions with other nearby clubs and provided fellowship through feasts and dances. Schlinke was often called upon as an advocate for his community. in one instance, he was the spokesman for landowners protesting the building of a road; to resolve the issue, Schlinke donated his own land for the road. he also donated property for this park in memory of his wife, who passed away in 1931. In 1940, Charles A. Schlinke died from illness and today is remembered as a man who was devoted to his family, community, church and business.
Andrew Butler Photos
Powered by ZENFOLIO User Agreement
Cancel
Continue