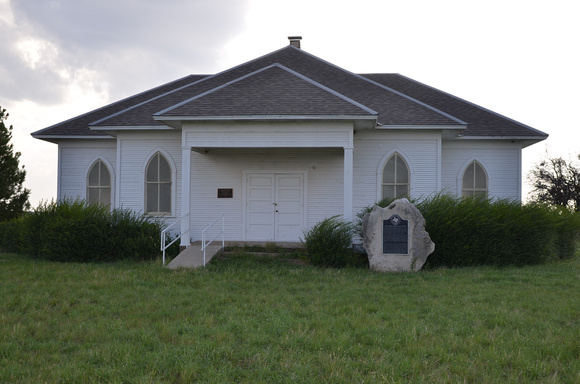 Text: The East Sweden community was settled in the late 1880s by Swedish immigrants who had originally established homes in Williamson County. By 1889 twelve familes had relocated here and built homes. Most of the settlers were Lutherans, and they held worship services in their homes. In 1890 a traveling Presbyterian minister, The Rev. J.A. Irvine, came to East Sweden and conducted worship services. The settlers agreed to become Presbyterians, and a congregation was organized by the Rev. Mr. Irvine and twelve charter members. A sanctuary was built on this site in 1892, and continued to serve the congregation until it was destroyed in a windstorm in 1916. The church members met in the schoolhouse until this structure was built in 1921. Exhibiting handsome features and quality craftsmanship, the East Sweden Presbyterian Church has become a local landmark. Outstanding features of the vernacular church structure include its hip-on-hip wooden shingled roof, Gothic-arched windows, boxed eaves, and projecting portico with boxed columns. The congregation continues to uphold the traditions of its Swedish founders.
Andrew Butler Photos
Powered by ZENFOLIO User Agreement
Cancel
Continue