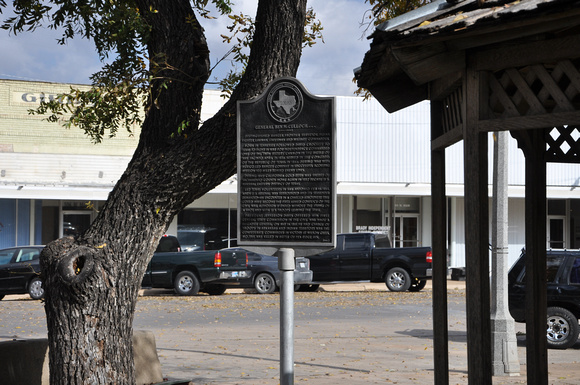 Text: (1811-1862). Distinguished Ranger, frontier surveyor, Indian fighter, lawman, statesman and military commander. Born in Tennessee. Followed David Crockett to Texas to fight in War for Independence. Commanded one of the "Twin Sisters" cannon in the Battle of San Jacinto, April 21, 1836. Served in the Congress of the Republic of Texas. In 1846, during war with Mexico, led Ranger company in successful scouting mission 100 miles behind enemy lines. During 1849 California gold rush was sheriff of Sacramento County. Home again in 1852 became U.S. Marshal, Eastern District of Texas. Led Texas volunteers in San Antonio Feb. 16, 1861, when U.S. arsenal was surrounded and its surrender demanded--an encounter in a charged atmosphere that could have become the first armed conflict of the Civil War, although it ended without the firing of a shot, and with U.S. troops leaving the state. President Jefferson Davis offered him first General Staff Commission in the Civil War. Made a Brigadier General on May 14, 1861, he had charge of troops in Arkansas and Indian territory. Was the Confederate Commander in victory at Wilson Creek, Mo., 1861. Was killed in Battle of Pea Ridge, Ark.
Andrew Butler Photos
Powered by ZENFOLIO User Agreement
Cancel
Continue