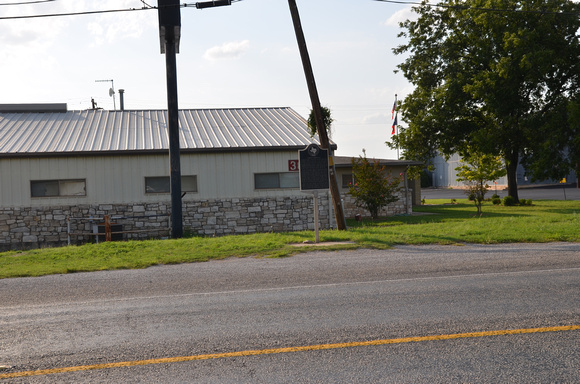 Text: Named for Harry Lamar Curtis, mayor of Brady who instigated offer of this field to the United States government during World War II. Born 1903 in Dallas, H.L. Curtis was educated at the University of Dallas, Southern Methodist University, and Texas A&M. He married (1929) Marjorie McCall of Brady and moved here after business successes in Dallas. Served on City Council 1936 to 1940 and as Mayor 1940 to 1944. In 1940 Mayor Curtis obtained designation of Brady Airfield as a national defense airport, with funding for enlargement and hard-surfacing. Small old field was relinquished and this larger tract provided. City paid about $40,000; federal grant was $141,631. Brady's clear skies, dry climate, and freedom from commercial air traffic made it a favored site. A contract school moved here from Love Field, Dallas, on March 16, 1941, and became Brady Aviation School, Ltd. Mayor Curtis led the city to grant free use of the field for ten years, with one dollar a year charged for utilities. Over 10,000 cadets trained here before the school closed in Aug. 1944. This was final duty for a few: 21 cadets, six instructors, a personnel officer lost their lives in accidents. This was one of 17 Texas civilian fields training military pilots during World War II.
Andrew Butler Photos
Powered by ZENFOLIO User Agreement
Cancel
Continue