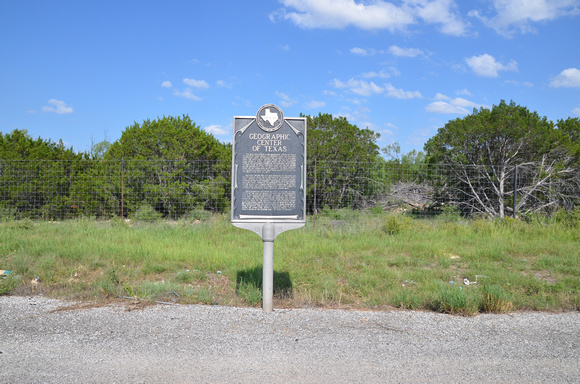 Text: Five miles northwest is the geographic center of Texas, an imaginary point whose coordinates divide the state into four equal areas. In straight-line distance it is 437 miles from the state's most westerly point on the Rio Grande River above El Paso, 412 miles from the most northerly point in the northwest corner of the Panhandle near Texline, 401 miles from the most southerly point on the Rio Grande below Brownsville and 341 miles from the most easterly point on the Sabine River near Burkeville. Maximum border-to-border distance is 801 miles from north to south and 773 miles from east to west. Enclosed within the 4,137-mile perimeter of the state are 267,339 square miles or 7.4 per cent of the nation's total area. Fifteen of the 50 states could be readily accomodated within Texas' borders--with more than 1,000 square miles left over. Brewster, in southwest Texas, is the largest of the state's 254 counties with 6,208 square miles, an area larger than the state of Connecticut. Smallest county is Rockwall in northeast Texas with 147 square miles. Texas elevations rise from sea level along the 624-mile coast of the Gulf of Mexico to 8,751 feet atop Guadalupe Peak in the Guadalupe Mountains. Altitude at this point is 1,545 feet. Terrain varies from the subtropic Rio Grande Valley to the trackless Great Plains, from the lush forests of East Texas to the rugged Trans-Pecos region where mountain ranges thrust 90 peaks a mile or more into the sky. But perhaps nowhere are Texas contrasts more pronounced than in average annual rainfall: from more than 56 inches along the Sabine River, nearly as much as Miami's, to less than 8 inches in the extreme West, as little as Phoenix's.
Andrew Butler Photos
Powered by ZENFOLIO User Agreement
Cancel
Continue