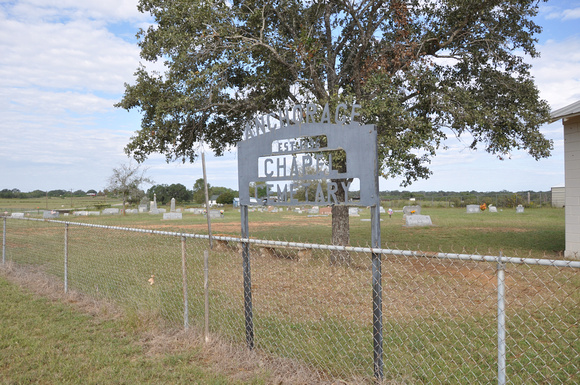 Text: The family of William and Mary Allen Stiggins emigrated here from Prince Edward island, Canada, in 1882. Included in the group were their daughter Mary Jane (1855-1935), who had studied medicine, and her fiancé Thoams Whittet (1838-1913), a former sea captain. Whittet is credited with naming this place Anchorage, declaring that this spot would be where the former seafarer would drop anchor. Thomas and Mary Jane married in the early 1880s, and in 1896 they deeded land for a church and cemetery to serve the communities of Anchorage and Rossville (2 mi. NE). The oldest marked graves, for Mary Allen Stiggins and Annie Theresa Farran, both date to 1896. The Whittets’ general store served as the Anchorage Post Office from 1889 to 1935. Mary Jane practiced medicine throughout the area and delivered many babies, including all nine children in the J.M. Rogers family. George Bopp, Jr. (1924-1945), a World War II casualty, is buried here. A frame church stood until 1958, replaced by a cinder block building on the same site. By 1979, the congregation was inactive, and the property was deeded to the Anchorage Cemetery Association, which maintains this burial ground and chapel.
Andrew Butler Photos
Powered by ZENFOLIO User Agreement
Cancel
Continue