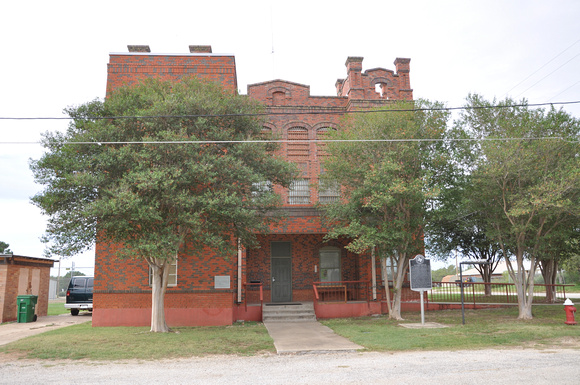 Text: County officials rented a small Jourdanton house for a jail in 1911 after the county seat was moved here from Pleasanton in 1910. A proposal to build a new jail with cells from the old Pleasanton structure was rejected and this reinforced-concrete, brick-clad building with new steel cells was authorized in 1915. This site was purchased that year from W.M. Abernethy (1851-1931), who had served as County Judge from 1901 to 1912. The architect of the 1912 Courthouse, Henry T. Phelps (1881-1945) of San Antonio, was chosen to supervise erection of the jail. The Southern Structural Steel Company of San Antonio was awarded the $20,000 construction contract. An electic blend of architectural elements was highlighted with crenelated towers and hood molds outlining the windows. The first floor housed offices and living quarters for Sheriffs and their families, provided from 1916 to 1959. A gallows room was built on the second floor, though its trap door was never sprung for execution. Standard and specialized cells were partitioned on the second and third floors. Additions were built in 1974, with bricks and detailing carefully matching original patterns. A new jail was built to replace this building in 1982.
Andrew Butler Photos
Powered by ZENFOLIO User Agreement
Cancel
Continue