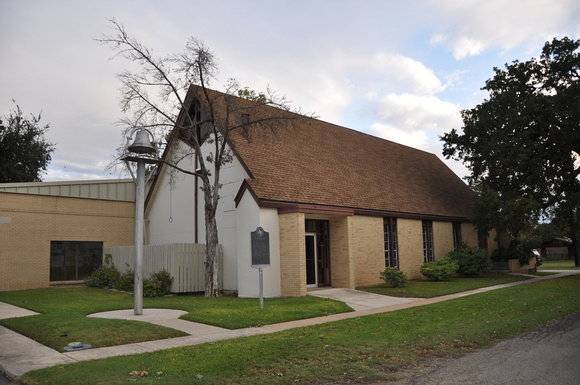 Text: According to oral history, the Lytle Methodist Episcopal Church, South, was founded in 1889. W.C. Newton, a local farmer and preacher, became known as "The Father of the Lytle Methodist Church" due to his efforts to establish a permanent place of worship. Newton also provided land for the Lytle Community Cemetery, cared for by church trustees. The Rev. Jerome P. Garrett served as the first appointed pastor from 1891-1893. The congregation built their first sanctuary in 1892. After the railroad came through Lytle, bypassing the Benton City community, the Benton City Methodist congregation merged with this one in 1909. An active Women's Missionary Society was founded in 1915; a youth group and the Methodist Men's Club were also established. To meet the needs of a growing congregation, the sanctuary was expanded and renovated in 1922. In 1950 a multi-purpose education building was added, and in 1957 a building committee planned a brick sanctuary with cathedral ceiling and stained glass windows. The Lytle United Methodist Church, as it has been known since 1968, continues to provide diverse ministries to the community through worship services, study programs and other charitable activities.
Andrew Butler Photos
Powered by ZENFOLIO User Agreement
Cancel
Continue