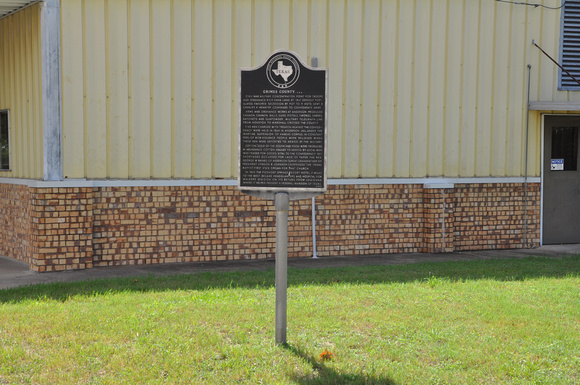 Text: Civil War military concentration point for troops and ordnance. Rich farm land. By 1861 densely populated. Favored secession by 907 to 9 vote. Sent 5 cavalry, 4 infantry companies to Confederate Army. Arms and ordnance works at Anderson produced cannon, cannon balls, guns, pistols, swords, sabres, bayonets, and gunpowder. Military telegraph line from Houston to Marshall crossed the county. Five men charged with treason against the Confederacy were held in 1864 in Anderson Jail, under the wartime suspension of habeas corpus, in constant peril of mob violence. People were relieved when these men were deported to Mexico by the military. Cotton, "Gold of the South", and food were produced in abundance. Cotton hauled to Mexico by local men was traded for goods vital to the Confederacy. Yet shortages occurred. For lack of paper, The Rev. George W. Baines of Anderson (great-grandfather of President Lyndon B. Johnson) suspended "The Texas Baptist", first state organ for that church. In 1865 the Piedmont Springs Resort Hotel, 7 miles to the west, became headquarters and hospital for Walker's division on its return from Louisiana where it helped prevent a Federal invasion of Texas.
Andrew Butler Photos
Powered by ZENFOLIO User Agreement
Cancel
Continue