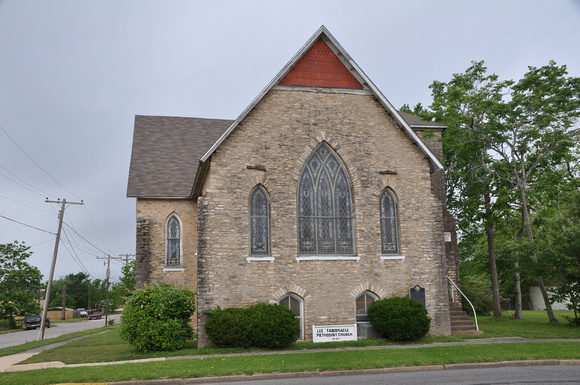 Navasota
Grimes County, Texas
30 23.031' N 96 05.121' W
Directions: Start at the intersection of Teague Street and LaSalle Street. The church is on the northwest cornrer of the intersection.

Text: This Methodist congregation was founded in 1860, and worshipped with the Baptist church in shared facilities in Navasota. A church building was erected in 1866 in what was called "Freeman's Town." The Methodist group was formally organized in 1876, and built a separate facility a few years later. This church building was erected in 1896. During construction, services were held in the basement until the sanctuary was finished. When the structure was completed, the congregation changed its name to honor the pastor at that time, The Rev. Edward Lee, becoming the Lee Tabernacle Methodist Church. Interior modifications have occurred over the years, including the restoration of the stained glass windows, the addition of a choir room, and general remodeling, but the exterior remains essentially intact. A parsonage was added to accommodate the pastor.This church structure is a fine example of a Gothic revival design, featuring arched windows, a tower entry, stained glass windows, double wood paneled doors, and a gabled roof. The Lee Tabernacle Methodist Church continues to serve its dedicated members as it has for over 130 years in the Navasota community.
Andrew Butler Photos
Powered by ZENFOLIO User Agreement
Cancel
Continue