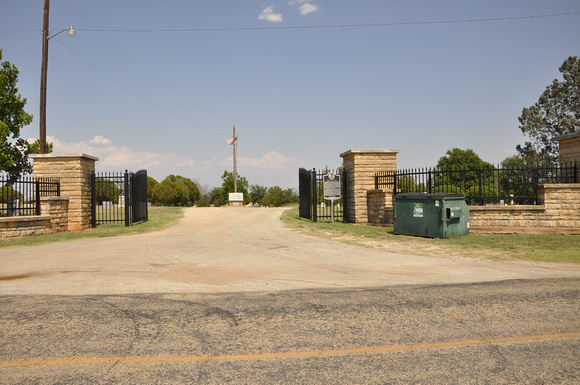 Historical Marker: With the construction of the Santa Fe Railroad in 1886, the town of Santa Anna grew rapidly and developed as a cattle shipping point. According to oral history, W.C. brooks was the first person buried in the Santa Anna Cemetery before the railroad was completed, although no grave marker is present. Mr. Brooks’ son, Lewis Brooks, gave the first section of land for the cemetery for his burial. The oldest dated monument belongs to sixteen year-old Mary E. Ashley (1869-1885). L.V. Stockard (1858-1923), the first railroad station agent of santa anna, is also buried at this site, along with his wife, Cora (Willett) Stockard (1860-1907). Other notable burials include Texas Ranger and County Sheriff John R. Banister (1854-1918) and his wife, Emma D. Banister (1871-1956), as well as fellow Texas Ranger, John Benicke Bachman (1820-1906). The landscape of the Santa Anna Cemetery is traditional with concrete, fieldstone, granite, and sandstone grave markers with a variety of natural and cultural trees, shrubs, and groundcover. This historic burial ground is home to twenty eight known Cvil War veterans with the oldest belonging to George Williams (1848-1897) of the Tennessee Cavalry CSA. Additionally, graves mark the burials of veterans from the Spanish American War, World War I, World War II, the Korean War, and the Vietnam War. Fraternal sections of the cemetery represent burials of Free Masons, members of the Independent Order of Odd Fellows, Woodmen of the World, and members of the Order of the Eastern Star. The Santa Anna Cemetery Association formed in 1943 and continues to care for the cemetery with volunteer workdays and events.