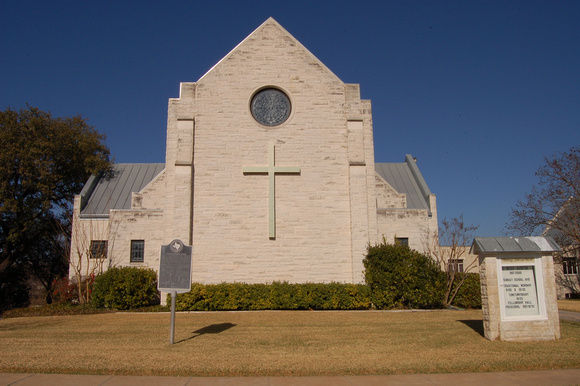 Text: Early settlers in Fredericksburg worshiped together in a community church, the Vereins Kirche. On March 27, 1887, the Rev. John Heinzelmann and about 80 families organized a separate congregation known as Die Evangelische Kirche (The Evangelical church). Early worship services were conducted in the Vereins Kirche and later in the Southern (First) Methodist Church. By 1889 the members were able to build their own sanctuary at 107 E. Austin Street. A cornerstone-laying ceremony took place on April 14, and the new structure was dedicated on September 15. In addition to its service in Fredericksburg, the church conducted missionary work in nearby communities. Its name was changed in 1932 to Evangelische Lutherische Bethanien Gemeinde, and in 1954 the congregation officially adopted the English translation, Bethany Evangelical Lutheran church. English-language services were first introduced in 1931, but German services continued into the 1940s. A new sanctuary was built here in 1954. The 1889 structure was sold to another local church. Throughout its history, Bethany Lutheran Church has maintained a variety of worship, educational, civic, and missionary activities.
Andrew Butler Photos
Powered by ZENFOLIO User Agreement
Cancel
Continue