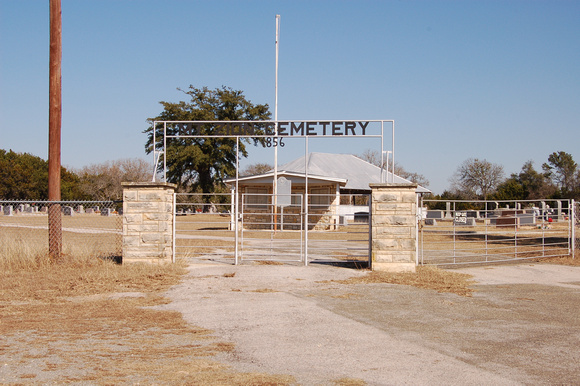 Historical Marker: John Jennings (1802-1867), his wife Sarah C. (Sally) (1806-1879), and their family came to this area in 1851. The settlement which grew up around their farm became known as Jennings Creek community. After Burnet County was created in 1852, John Jennings was instrumental in organizing the new county government. He was a county commissioner for four years. The oldest documented burial in this graveyard, which was originally known as the Jennings Family Cemetery, is that of Mary Ann Jennings (1835-1856). Other early burials include those of John and Sally Jennings, members of their family, and neighbors. The Jennings Family Cemetery became known as Mount Zion Cemetery when the Mount Zion Cumberland Presbyterian Church was built about one-half mile south of this site in the 1890s. The land on which the cemetery is situated remained in the Jennings family until 1944. Among the more than five hundred grave markers here are tombstones of veterans of the Civil War and the Spanish American War. A cemetery association incorporated in 1972 cares for the historic graveyard.
Andrew Butler Photos
Powered by ZENFOLIO User Agreement
Cancel
Continue