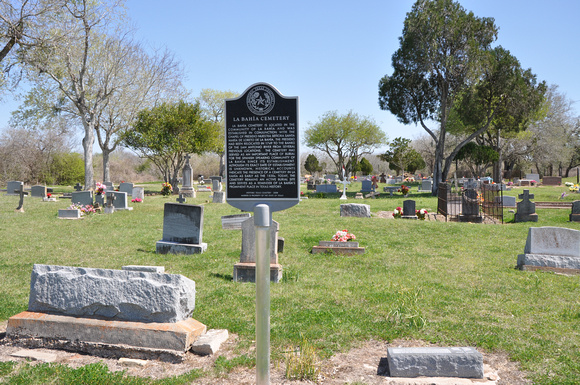 Goliad
Goliad County, Texas
28 38.798′ N 97 22.822′ W
Directions: Start at the intersection of Lopez Road and Cabrera Road south of Goliad. The cemetery is on the southeast corner of the intersection.

Historical Marker: La Bahia Cemetery is located in the community of La Bahia and was established in conjunction with the Chapel of Presidio Nuestra Senora de Santa Maria de Loreto de la Bahia. The presidio had been relocated in 1749 to the banks of the San Antonio River from several previous locations. The cemetery has served as an important place of burial for the Spanish speaking community of La Bahia since its establishment. Although its exact date of establishment is unknown, historical accounts indicate the presence of cemetery in La Bahia as early as the 1830s. Today, the cemetery remains an active burial site and serves as a reminder of La Bahia’s prominent place in Texas history.
Andrew Butler Photos
Powered by ZENFOLIO User Agreement
Cancel
Continue