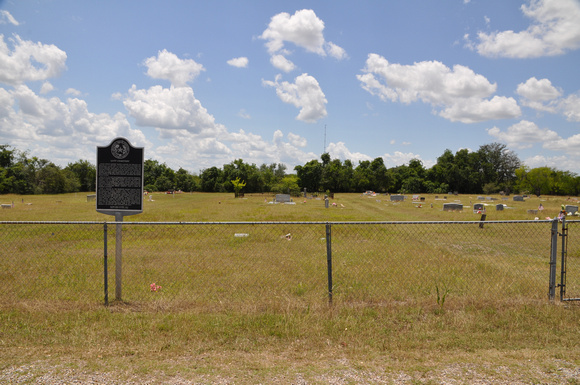 
Historical Marker: Mount Vernon Cemetery trustees acquired the two-acre Lott Cemetery plot in 1896 from Victoria Lott, widow of farmer and businessman Battice Lott. The earliest known burial here is of charity Johnson, who died in 1892. At an unknown date, the cemetery's name was changed to the Lott Cemetery, probably in honor of a local African American family, some of whose members are buried here. Other burials are of men and women who worked in the local cattle industry, including Traildriver George McDow. Oriented to the east in accordance with Christian tradition, the grave markers, from simple wooden crosses and handmade cement slabs to sculpted granite obelisks, reflect the economic fluctuations in the local farming and ranching community. Other traditional elements are the cement borders and low ornamental fences that outline some family plots and stands of naturalized crinum "cemetery" lilies, a staple of southern cemeteries. After a tornado in 1902 destroyed Goliad's Fannin Street Methodist Episcopal Church and the surrounding neighborhood, several dozen victims, including Salina Bennett Tate, were interred in a communal grave along the Lott Cemetery's eastern boundary. Many other members of that church are buried here as are at least thirty veterans from all branches of the U.S. military services. A headstone inscribed simply ""Bingo"" marks the grave of an orphaned African American man who was raised by prominent cattleman Ed Lott's wife; he died around 1916. One of the two centenarians buried in the cemetery (Gertrude Todd is the other), Hattie Rhooney's life spanned three centuries (1895-2002).
Andrew Butler Photos
Powered by ZENFOLIO User Agreement
Cancel
Continue