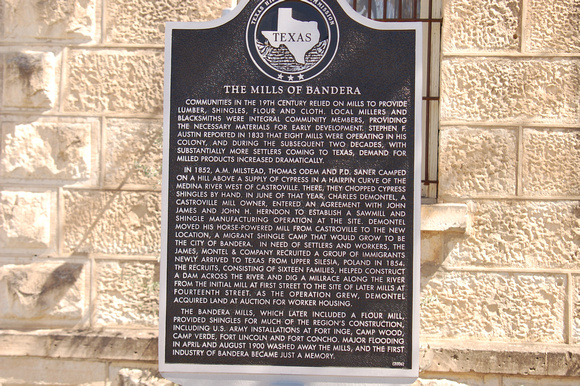 Text: Communities in the 19th Century relied on mills to provide lumber, shingles, flour and cloth. Local millers and blacksmiths were integral community members, providing the necessary materials for early development. Stephen F. Austin reported in 1833 that eight mills were operating in his colony, and during the subsequent two decades, with substantially more settlers coming to Texas, demand for milled products increased dramatically. In 1852, A.M. Milstead, Thomas Odem and P.D. Saner camped on a hill above a supply of cypress in a hairpin curve of the Medina River west of Castroville. There, they chopped cypress shingles by hand. In June of that year, Charles DeMontel, a Castroville mill owner, entered an agreement with John James and John H. Herndon to establish a sawmill and shingle manufacturing operation at the site. DeMontel moved his horse-powered mill from Castroville to the new location, a migrant shingle camp that grow to be the city of Bandera. In need of settlers and workers, the James, Montel & Company recruited a group of immigrants newly arrived from Upper Silesia, Poland in 1854. The recruits, consisting of sixteen families, helped construct a dam across the river and dig a millrace along the river from the initial mill at First Street to the site of the later mills at Fourteenth Street. As the operation grew, DeMontel acquired land at auction for worker housing. The Bandera mills, which later included a flour mill, provided shingles for much of the region's construction including U.S. Army installations at Fort Inge, Camp Wood, Camp Verde, Fort Lincoln and Fort Concho. Major flooding in April and August 1900 washed away the mills, and the first industry of Bandera became just a memory.
Andrew Butler Photos
Powered by ZENFOLIO User Agreement
Cancel
Continue