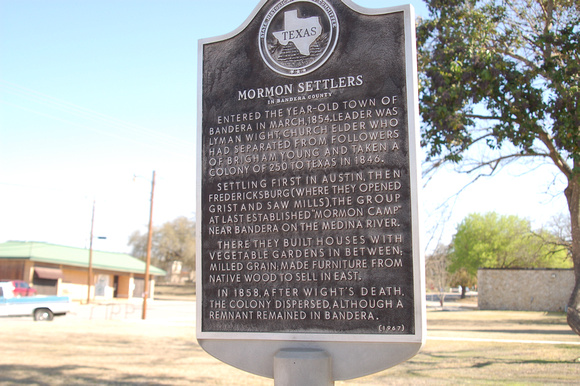 Text: Entered the year-old town of Bandera in March, 1854. Leader was Lyman Wight, church elder who had separated from followers of Brigham Young and taken a colony of 250 to Texas in 1846. Settling first in Austin, then Fredericksburg (where they opened grist and saw mills) the group at last established "Mormon Camp" near Bandera on the Medina River. There they built houses with vegetable gardens in between; milled grain; made furniture from native wood to sell in East. In 1858, after Wight's death, the colony dispersed, although a remnant remained in Bandera.
Andrew Butler Photos
Powered by ZENFOLIO User Agreement
Cancel
Continue