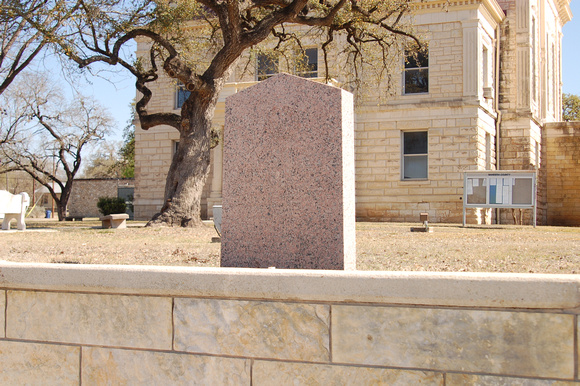 Text: Site 25 mi. West on Hy. 470, 1 mi. South. Established 1862 as part of Red River-Rio Grande defense line. Named for Captain Charles DeMontel, surveyor and colonizer of Bandera, leader of county defenses. Occupied by troops of Texas frontier regiment who furnished their own guns and mounts but often lacked food, clothing, supplies. In 1860 Bandera County's population was 399. Although all the men were needed to defend the county from Indians, many joined the Confederate and State troops. Some went to protect the Texas Coast from Union invasion. Many were assigned to defend the frontier in this region. Scouting parties and patrols managed to effectively curb Indian raids until war's end. Texas had 2,000 miles of coastline and frontier to defend from Union attack, Indian raids, marauders, bandits from Mexico. Defense lines were set to give maximum protection with the few men left in the state. One line stretched from El Paso to Brownsville. Another, including Camp Montel, had stations a day's horseback ride apart from Red River to Rio Grande. Former U.S. Forts used by scouting parties lay in a line between. Behind these lines and to the east organized militia, citizens' posses.
Andrew Butler Photos
Powered by ZENFOLIO User Agreement
Cancel
Continue